New Zealand has a limited range of ores and economic minerals compared to Australia. Large scale mining has been restricted principally to gold and coal.

Maori used several types of minerals, either found on the surface or extracted by quarrying. The main source of obsidian (mata) was Mayor Island (Tuhua), in the Bay of Plenty; used for cutting and scraping, it was traded throughout the country. Pounamu (nephrite, commonly known as greenstone), used for adzes and chisels, and only found on the West Coast of the South Island, was also widely traded. Argillite (pakohe) from D’Urville Island in the Marlborough Sounds, used to make adzes, was similarly traded. There was some use of iron-sand, found on the beaches of Taranaki and northwards, for pigment, and reputedly the Tainui tribe of the Waikato used local coal (waro) for cooking.

Although Maori were aware of the existence of gold, they had no use for it, but once Europeans explained its value some became skilled prospectors; Maori families were prominent in the first real gold rush, in 1857, to the Aorere field of Golden Bay.

Most of the early discoveries were of alluvial gold, but quartz reefs were soon found on the West Coast.  There were no ‘poor-man’s fields’ in the North Island because almost no alluvial gold existed there. The first gold discovery was made by a Tasmanian, Charles Ring, near the future town of Coromandel in the North Island in 1852, but this field did not flourish. Another Tasmanian, Gabriel Read, discovered gold in the Tuapeka district of Otago, in the South Island, in 1861; it was named Gabriel’s Gully in his honour and attracted miners from many countries, notably Australia (Chinese miners were encouraged to the Otago fields from 1864 onwards). Subsequent discoveries in Otago and on the West Coast followed, with attention returning to the North Island with the opening of the Thames field in 1867. The most significant discovery in the Hauraki district was of the Waihi mine in 1880, which became one of the great mines of the world and is still being worked. From the 1870s, large companies were becoming dominant on most fields, with dredges and sluicing being introduced in alluvial districts. Production had faded by the 1920s, but for several decades gold had provided an important stimulus to the nation’s economy.

Coal was discovered first in the South Island in the 1840s and the first small coal mine was opened near Dunedin in 1849; North Island coal was not found until the 1860s. The major coalfields were at Brunner and the Denniston plateau on the West Coast, parts of Otago, and at Huntly in the Waikato. For many years coal was the main source of energy, but production fell from the 1960s once coal was no longer used by the railways and shipping and most electricity was produced from hydro, natural gas, and geothermal power stations. By the 1970s most coal was extracted from open cast mines, being used for the Glenbrook steel mill, the Huntly power station, and for dairy factories; high-quality coking coal from the West Coast was, and continues to be, exported.

After 1948, at Te Aroha in the North Island, two companies attempted to extract zinc, copper and lead sulphides from the country’s only base metal mine before the site was abandoned in 1973, leaving a serious pollution issue not finally resolved until 2013.

Mercury was mined at Karangahake and in Northland, producing more of the precious metal than Australia.

Sand extraction from coastal locations has declined in recent years because of damages to dunes and beaches and in particular to archaelogical sites such as middens and urupa (burial places).

All the Titanomagnetic ironsand obtained from Maioro (at the north head of the Waikato River) is sent to the Glenbrook steel mill (the country’s only steel mill); all the ironsand extracted from Taharoa on the west coast of the Waikato is exported.

Sulphur was mined on White Island, a constantly active volcano off the coast of the Bay of Plenty, until a lahar killed all the workers in 1914.

Limestone is abundant, with two especially large quarries in the karst country near the Waitomo caves; the stone produced here is mostly used for agricultural fertiliser. Stone for making concrete was taken from Golden Bay and is still taken from Milburn in Otago for this purpose in addition to making fertiliser.

Greywacke, the country’s most common rock, is crushing into aggregate for road making and for building purposes.

Clay is found throughout New Zealand, and is used for drainpipes, tiles, porcelain and terracotta as well as for bricks: yellow ones from Huntly in the Waikato and red ones from Banks Peninsula, close to Christchurch.

Marble has been quarried from Takaka Hill, in north-west Nelson, and used in the construction of buildings.

Dolomite is found only in Mount Burnett, in Golden Bay; it is added to phosphate fertiliser. Phosphate deposits were soon exhausted and now has to be imported.

In addition to the above, Some asbestos, pumice, serpentine, and zeolites were mined.

Mining in the 21st Century

Public concern about the environmental impacts of mining now restricts the development of potential new mines. The threat of global warming has meant that the large lignite coal deposits in the lower South Island have not been developed. Maori, in particular, are critical of the environmental implications of all types of mining, with special concerns about sand mining of all varieties and oil exploration off the coast. Oil production in Taranaki by fracking is opposed by many, despite no proven contamination of aquifers. Increasingly mining is forbidden on land with conservation value, notably in the Coromandel peninsula and on land administered by the Department of Conservation; in particular, open cast mining is opposed. Increasingly stringent controls seek to address such issues as acid mine drainage. The Huntly power station will cease using coal in the 2020s, as will dairy factories, as part of the goal of the country becoming carbon neutral. Some mostly small-scale gold mining continues (the open-cast Macraes mine in Central Otago being a notable exception), usually tidying up what remains from the nineteenth century workings, and will gradually fade away. However, the extraction of road metal, limestone, ironsand, and clay will continue to be by far the largest industrial mineral output. 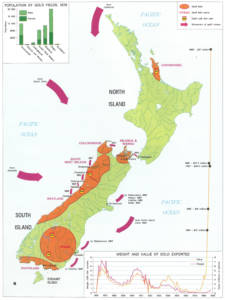