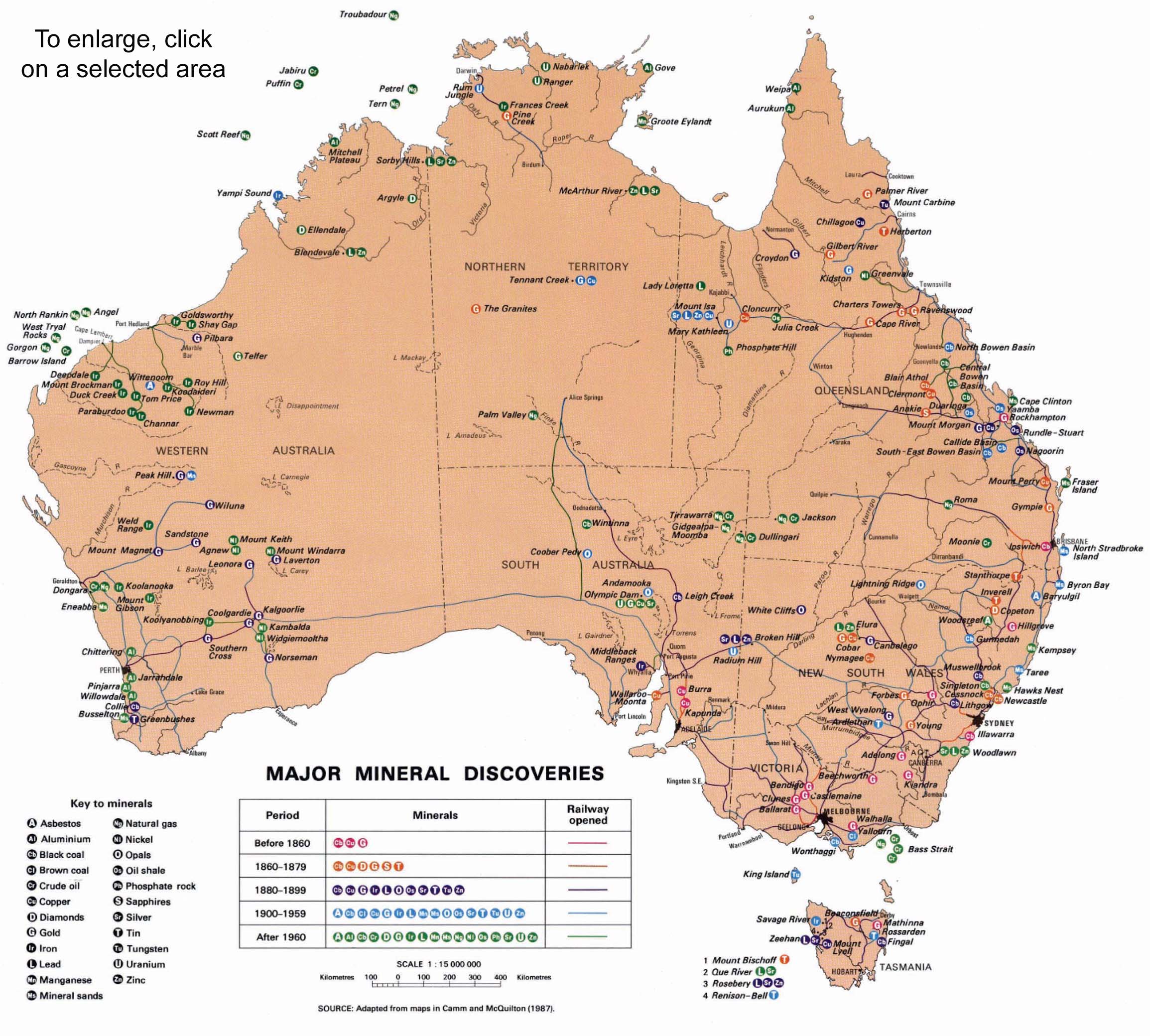 Source: Atlas of Australian Resources, 1988. Click on map to enlarge

The Beginnings
In Australia, minerals have been part of the continent’s culture and development since the first human habitation. Minerals were used as pigment in ancient rock art and body painting, an integral part of the Aboriginal culture and heritage. Minerals began to be produced in Australia in large quantities from the early days of European settlement at Sydney Cove. Within ten years of the First Fleet arriving in 1788, coal was discovered near Newcastle in New South Wales and later to the south and west of the settlement. These areas provided fuel for heating and cooking, and later steam locomotion in the young colony of New South Wales. The first metal mined in Australia was lead at Glen Osmond near Adelaide in South Australia in 1841 followed soon after by copper at Burra and Kapunda. The young colony was quick to start exporting agricultural products but by 1850 exports of copper and lead from South Australia earned more than Australia’s exports of wool and wheat. The value of these mines was soon overshadowed by the discovery of copper at Moonta and Kadina leading to the emigration of skilled Cornish miners and their mining technology.

The Goldrushes of the 1850s
The goldrushes of the 1850s made the Australian colonies world famous for mining. Gold was first discovered in New South Wales in 1823 by a public official named James McBrien while he was on a survey mission in hills near the Fish River east of Bathurst. The gold was sparse and McBrien’s record of his find was forgotten. Other traces of gold were found in the following decades in New South Wales and in Victoria. Edward Hammond Hargraves had returned to Australia from the Californian goldrushes and guided by a publican’s son, John Hardman Australia Lister, he had ridden to Lewis Ponds Creek, near Bathurst. Here he washed sand and gravel in a borrowed tin dish and of the six dishes he washed, all but one yielded a grain of gold. Hargraves’ efforts to publicise his find started the first goldrushes and others followed in Victoria, particularly at Ballarat and Bendigo. With news of the rushes, people began to emigrate to the Australian colonies and growing population enabled increased agricultural and industrial development. By the 1850s, Australia was producing almost 40 per cent of the world’s gold. Australian goldrushes, in particular the Victorian Goldrush, had a major lasting impact
on Victoria, and on Australia as a whole.

1870 – 1900
In the 1870s, Australia became an important producer of tin with the discovery of the metal at Mt. Bischoff in Tasmania. In the latter years of the 19th Century, the first great mines were established: Copper and gold at Mt. Morgan near Rockhampton in Queensland; Silver, lead and zinc at Broken Hill in New South Wales; Gold at Coolgardie and Kalgoorlie in Western Australia; and Iron ore at Iron Knob and Iron Baron in South Australia.

1900 – 1950
In the early years of the 20th Century, mining activity in Australia began to decline despite a continued rise in the value of mineral production. The only major finds of the first half of the century were lead, zinc and copper deposits at Mt Isa but their full potential was not realised until the 1950s.

The Resources Boom
Until the early 1960s it was believed Australia lacked sufficient reserves of iron ore for domestic use. Once export controls of iron ore were lifted, the development of the Pilbara iron ore region in Western Australia commenced. Aided by information from the Bureau of Mineral Resources (now Geoscience Australia), the pace of exploration was stepped up. Discoveries of the ‘new’ metals – bauxite (the source of aluminium), nickel, tungsten, rutile (the source of titanium), uranium, oil and natural gas followed a resurgence of interest in Australia’s mineral resources. Production of other minerals also increased and Australia became a major raw materials exporter, especially to Japan and Europe.

Read about the Future of Australian Mining History